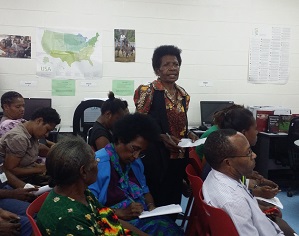 Community workers, human rights advocates and many more attended a human trafficking awareness session yesterday at the American Corner in the National Library, to commemorate the World Day Against Trafficking in Persons.

The International Office of Migration, PNG government and National Human Trafficking Committee were behind the initiative, which included drama, discussion and speeches on understanding and recognising human trafficking for the criminal offense it is.

Papua New Guinea upgraded from Tier 3 to Tier 2 in the 2015 US Trafficking in Persons Report, released on Monday this week, which is a nod to the country’s actions in eliminating human trafficking, including sex trafficking and forced labour.

The US Embassy also details that in PNG, foreign and local women and children are forced into sex trafficking, domestic servitude, forced begging and street vending, and that foreign and local men are coerced into forced labour in logging and mining camps.

The presentation ended in a lively debate between many activists and community members present, on which government bodies and organisations are available in directly confronting the issue.

US Ambassador Walter North questioned why the community remained silent, and encouraged Papua New Guinea’s to act on the Criminal Code Act.

But the most important fact established was that trafficking begins with the community and that educating everyone, from the bottom up, understanding human trafficking and reporting on incidents is a fundamental step forward. All present were briefed on Papua New Guinea’s Criminal Code Act, which was presented by the office of the attorney general.

Human trafficking happens mostly in PNG’s mines, houses and brothels, with young girls still being sold or offered as compensation in certain areas in PNG.

A human trafficking hotline is now available for those willing to report a case: 71007777.