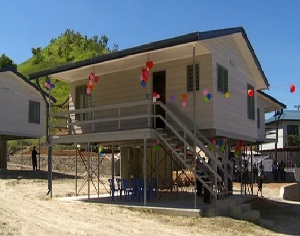 Minister for Housing and Urban Development, Paul Isikeli, today handed over house keys and titles to the Ombudsman Commission for its staff.

Minister Isikeli said the handover was just the start of many housing projects in the country.

The K3 million Ombudsman Commission Housing Project is located at Gerehu 3B2, in Port Moresby. Each of the houses are worth between K200,000 and K300,000, complete with basic furniture and white goods.

Present at the handover ceremony were staff of the Ombudsman Commission, counterparts in the law and justice sector, NHEL and its business partners Berkeley Capital and Korean Niugini Housing, and other stakeholders.

NHEL’s Executive Chairman, Kevin Ahipum, said this was the first project delivered by the group.

Minister for Housing and Urban Development, Paul Isikeli, said that with housing projects like this one, the government is encouraging nationals to own their own homes as well as to create wealth.

The keys for eight of the houses together with state leases and titles were presented by NHEL to the Housing Minister, and then on to Acting Chief Ombudsman, Phoebe Sangetari.

The official blessing of the estate and ribbon cutting followed the ceremony.

The other key projects of the NHEL are the K800 million Gabutu Palace Project, to be developed with Korean partners, and the K35 million Gobuta Street Estate with Berkeley Capital, which are expected to be completed by April this year.

Public Accounts not satisflied with Telikom