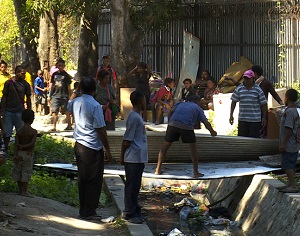 Over seven houses and properties at Danwaia at 4mile, Port Moresby, were destroyed this afternoon following what settlers described as a forced eviction.

Settlers said they have proper land titles to the land however an Asian company is claiming the land for development.

A retired public servant, Tony Kagl, told EMTV News they have been to court with the Asian company for over 10 years.

The settlers added that despite the courts granting them a formal title, the Asian Company has issued an eviction order for the houses and properties to be destroyed.

Speaking off camera, police present to oversee the eviction said an eviction notice was given to settlers three years ago. But, Mr Kagl said there were no notices given to them in the last 10 years.

Meanwhile the Lands Department issued a stern warning to people who reside illegally on state land to voluntary vacate the land for development.

However, Mr Kagl said the Lands Department must not favor Foreign Interests, rather fight for local land owner’s rights.

CPL Awards Women for their Passion to Serve