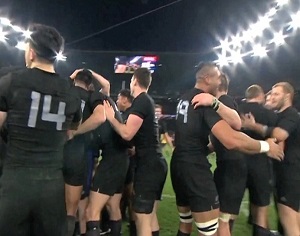 They arrived to a Haka performed by the ground staff; the staff weathered the rain to deliver the performance for the All Blacks as they touched down on the tarmac.

They were then greeted by hundreds of screaming fans who filled Auckland International Airport to welcome back the team. The All Blacks also took time out to sign autographs and take pictures with their fans upon arrival.

The All Blacks were overwhelmed by the reception they received at the airport and were thankful to their fans and families for the support during the Rugby World Cup.

The All Blacks defeated the Australian Wallabies in the Rugby World Cup final to record their second straight triumph.