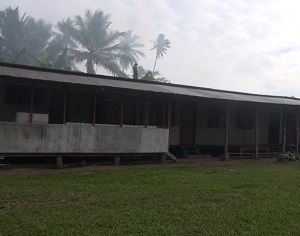 The Terapo Health Clinic in East Kerema, Gulf Province, is in dire need of assistance.

The Catholic run clinic, which serves over 8,000 people in Terapo Village in the Taure-Lakakam LLG of East Kerema, has been operating for weeks now without any funds.

The clinic uses an old building that was once used by a construction company, a building that is in no state to be providing medical services to patients.

“Inside the building there are termites and what not, everything that you can think of is in there, even snakes,” villager, David hela said.

The clinic has one out-patient room, and one labor ward. Community Health Workers (CHWs) say that when the ward is full, women are forced to give birth outside in the yard.

“For serious emergency cases we refer them to Malalaua or Kerema Hospital. We do not have the capacity to cater for these patients,” Acting Officer in Charge, Melanie Serei said.

They are now appealing to the Health Department and Catholic Health Services for help, as if the clinic remains in its current state, it will be sure to close.

Stand-Off Between Lae Based Security Firms