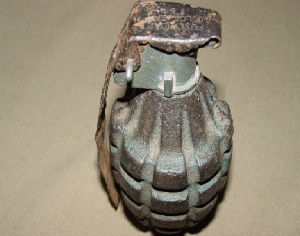 A pineapple hand grenade used in World War II was found yesterday in a house in the Lae’suburb of East Taraka.

Police came upon the hand grenade after acting on a tip-off, saying that recent escapees from Buimo Prison were using the premises as a safe house.

They called in experts from the Papua New Guinea Defence Force (PNGDF) yesterday to disarm the suspected booby trap, positioned to explode within the house’s shower.

Police conducted a quick search around the house, before they took a look in the bathroom. This is where they found a military grade hand grenade, which looked as though it had been set up as a booby trap, ready to explode if the shower door was pushed opened.

Detectives from the Lae Criminal Investigation division were at the scene when EMTV arrived after being told by the public, but the detectives refused to comment on the situation.

The whole block was quickly sealed off to the entire neighborhood and families were asked to move away from their homes.

It’s understood that the bomb experts secured the grenade yesterday afternoon, but information about where the grenade came from remains sketchy.