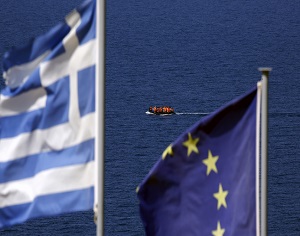 Image: A dinghy overcrowded by migrants and refugees approaches the Greek island of Lesbos after crossing a part of the Aegean Sea from the Turkish coast September 20, 2015. REUTERS/Yannis Behrakis

ATHENS (Reuters) – Greek police arrested six people on Saturday in an operation to break up a gang which counterfeited documents for asylum seekers on a Greek island, the coastguard said.

The criminal group was active on the island of Kos, the coastguard said in a statement, adding that the authorities seized computers, cameras and a large number of fake documents and mobile phones from several houses on the island.

About one million refugees and migrants arrived to Greece last year, fleeing conflict in the Middle East and beyond and seeking to reach wealthier Western European countries.

The European Union and Turkey have agreed to stop the flow of migrants to Europe in return for political and financial concessions for Ankara, sealing off the main route by which people poured across the Aegean islands, including Kos.

About 50,000 refugees and migrants were in Greece on Saturday, many living in squalid conditions in tents near its northern border with Macedonia, waiting for a border to open.
Under the EU-Turkey deal, hundreds of new arrivals have been detained since Sunday. Refugees or migrants whose applications fail will be sent back to Turkey.

Suspended Blatter says won’t go down without a fight – paper