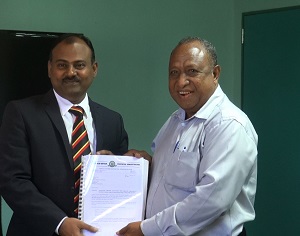 West New Britain Governor, Sasindran Muthuvel, says funds allocated to districts in a province must consider the population of people.

Governor Muthuvel expressed to the Office of Rural Development (ORD) Secretary, Paul Sai’i, the need for more consideration when appropriation funds to districts.

Governor Muthuvel said despite receiving his 2014 Provincial Support Improvement Program funds, little but fair work has been achieved. He made this statement following the presentation of 2014 PSIP acquittals to the Office of Rural Development recently.

West New Britain’s 2014 PSIP funds were prioritised in the areas of education, health, roads, and law and order. Governor Muthuvel says, WNB has a growing population because of the oil palm industry in the province.

Governor Muthuvel is among the many MP’s who commented on the Government’s appropriation of funds to each province, and the work these funds can make.

Secretary Sai’i said ORD will allow for comments from MP’s to create a conducive pathway to help each province bring the much needed change their districts.

Two Police Officers to be Suspended for Assaulting Teenager