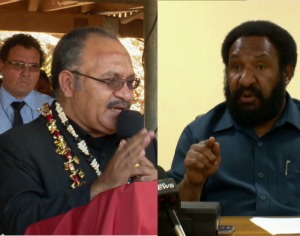 Prime Minister, Peter O’Neill, remains unfazed by moves to oust him through a vote of no confidence.

He told a gathering today at Tatana in Port Moresby that the government still has the numbers.

However opposition leader, Don Polye, yesterday called on members of the government to side with him to overthrow the government.

The recent Supreme Court decision, which nullified amendments to section 145 and 142 of the constitution, allows for only 11 signatures and not 22 signatures to see a motion raised.

This could potentially see O’Neill removed come the October and November parliamentary sitting, should the opposition muster the numbers.

On the economic front, Prime Minister O’Neill admits a setback in the economy has hampered many projects, and has blamed the commodity price crisis for the result of this economic slowdown.

He says cuts to key priority areas of Health, Education and Infrastructure will not be enforced.

However, the opposition thinks otherwise, citing huge cuts to these priority areas.

Marum Names Squad to Play in Weekend Match Against Devils

Bio Security System in the Country Described as Poor and Unreliable