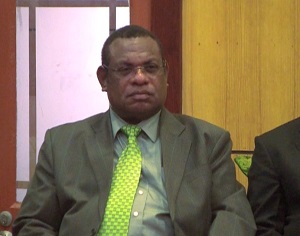 The National Government is mapping out up to K1.3 billion in expenditure cuts to the 2015 National Budget, as volatile economic conditions and a plunge in crude oil and LNG prices take a toll on projected government revenue.

Treasury Minister, Patrick Pruaitch, announced this today before flagging plans to raise up to K2.5 billion through a sovereign bond, to stabilise the country’s economy before major projects come online.

“By taking prudent action at this time, the government will safeguard PNG’s economic performance in the next few years, when key commodity export prices are expected to remain low,” said Mr Pruaitch.

He said that the government’s fiscal strategy had been endorsed during the recent Article IV consultations of the International Monetary Fund, which concluded that large spending cuts were needed to keep public debt at a sustainable level.

Mr Pruaitch said the government has already earmarked K1.3 billion in expenditure cuts this year, and was assessing further measures to ensure that the deficit would be much lower than the figures projected in the Treasury Department’s recently released Mid-Year Economic and Fiscal Outlook.

One of these measures is the raising of up to K2.5 billion through a Sovereign Bond.

A sovereign bond, is usually issued by a national government. It is a straight forward instrument to raise public debt, and receives favourable treatment in the market, because it has the backing of the government.

This means that there is a guarantee by the government, on the repayment of principal, and interest.

EMTV understands that the Bank of PNG has already had consultations on the matter, since the funds would need to be raised this year, for the budget.