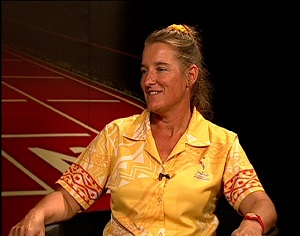 The 2015 Port Moresby Pacific Games will be the perfect opportunity to display, not only unity and sportsmanship in the Pacific, but to showcase Papua New Guinea’s unique culture and tradition.

The Games Organising Committee will soon embark on a journey throughout the 22 provinces, encouraging the involvement, of the wider population of Papua New Guinea.

With a population of 7 million, over 800 different languages, and 22 provinces, Papua New Guinea is one of the most diverse countries in the world.

Relay team manager, Tamzin Wardley said, the relay will not only assist in spreading the awareness on the games, but will be a great opportunity to showcase PNG’s diversity, to the rest of the Pacific.

The relay team begin their 100 day journey on the 26th March, with Vanimo, in the Sandaun Province, their first visit.

“The people of Vanimo have known for quite some time that they would be the first province, so they’ve got something big planned for us,” Tamzin said in an interview.

Over the last six months, the team has worked closely with Tanya Nugent, director of Makoda Productions, contracted to producing the opening and closing of the 2015 Pacific Games, to incorporate the finale of the games relay, with the opening ceremony, on the 4th of July.

“I can’t give too much away, but the baton returns and the relay end at the opening ceremony, and we’ve got something exciting planned.”

2015 Pacific Games mascot, Tura the Kokomo, is part of the relay team, which will travel throughout the 22 provinces.

Manning urges public to get tested