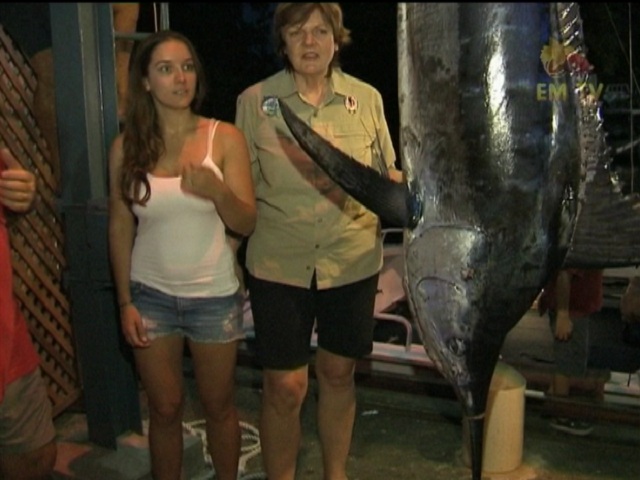 It has indeed been a hectic but fun-filled ten day event for these anglers with up to seventy three marlins being caught and some tagged while everyone was able to catch a fish.

Allthe fishing action in Madang rubbed offthe locals;they had to make do with home-made hook, line and sinker.

The Game Fishing titles have provern to be a family oriented event and this year’s titles gavethe flying fox city of Madang an extra boost.

With Perfect Wether conditions and calm seas just being out at sea wasthe idle place to be.

Witch Doctors earned a mega catch nearthe volcano, it tookthem 2 hours to securethe 182 kilo marlin and although it was a fine catch, anglers did feel a sense of sadness.

Everyone gthered round in awe to see how heavy this beatuty of a catch would weigh. Crew members of “withch doctors” certainly satisflied withthe outcome.

Presentation night was a fitting send off for allthe anglers. There were team awards, individual awards, junior male and female awards, and eventhe ladies scoredthemselves some prices as well.

Many were pleased withtheir team efforts but for thers, it was time to confess but still rejoice inthe moment though.

It was pleasing forInternational Anglers like this family team called “Painim Pis” allthe way from South Australia. When asked about fishing in PNG it’s all so natural, easy come, easy go!

Lae will host next year’s 39th National Game Fishing Titles and until that time organisers, sponsors, boats andtheir anglers and everyone else involved can givethemselves a pat onthe back for anther successful National Game fishing titles.

Back to Business After Vote of No Confidence