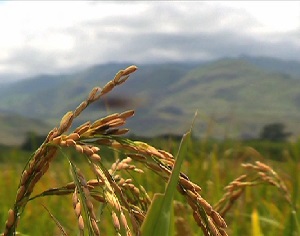 Papua New Guinea can grow rice for commercial use.

Scientists from the Philippines said this during the harvest of the Gabadi Pilot Hybrid Rice Project in Central province.

The scientist who developed hybrid rice was present at the launch of the harvest yesterday and, according to him, PNG has the ideal temperature, weather and soil for growing the commodity.

A team of media personnel was taken up the Hiritano Highway, about an hour’s drive from the nation’s capital, to the Gabadi rice project site.

Koren Maso, from Village Garden Limited, said three types of rice were being trialled; SL8, SL12 and SL18. The pilot plot, which is 1 hectare wide, will yield 10,000kg of rice. It was planted three months ago.

Maso said the scientist who developed hybrid rice from the Philippines said PNG has the essential elements to grow rice on a large scale and go commercial.

The pilot hybrid rice project used the irrigation system, using four water pumps set up near the river. A harvester was brought in for the harvest process.

Maso said the country has been importing rice for years and with the ever increasing cost, this rice project has the potential to help citizens save money.

Maso also said the harvested rice will be taken to Pacific Adventist University, where there is a processing plant. The rice will be packaged, under the brand VG Super Rice, and distributed to shops around the country.

Only then, Village Garden will conduct market surveys to see how well Papua New Guineans respond to the new product.