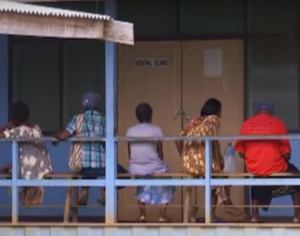 This is rather timely as Papua New Guinea has the highest number of tuberculosis (TB) cases in the Pacific, and is among the highest in the world.

Western Province Governor, Ati Wobiro, today presented a K300,000 cheque to PNG World Vision to help in the fight against TB in the province.

World Vision has been working in partnership with the Western Provincial Government for the past three years.

In terms of government support, The Western PEC has pledged K17 million to fund TB programs.

Governor Wobiro also challenged the national government to pump in more support to fight TB in his home province.

Receiving the cheque, World Vision Country Director, Dr. Curt von Boguslawski, said he is looking forward to using the donation to its right purpose to fight TB in Western Province.

According to Dr. Boguslawski Western Provincial Health is aware of the donation and is planning the use of the funding.