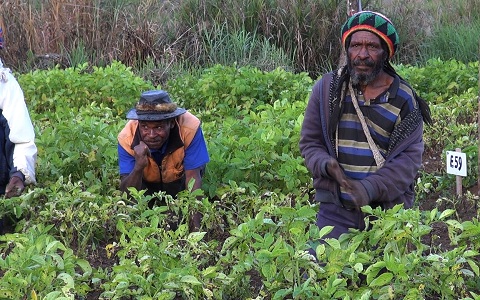 Hundreds gathered in Tari on Friday to witness the launch of the Fruit and Vegetable Development Program for Hela Province.

A program rolled out by the Fresh Produce Development Agency to farm the land, develop agriculture and sustain livelihoods.

The township of Tari was packed with people from all over the 3 districts of Hela.

Present were the 12 model farms established by FPDA from Tari Pori, Komo-Magarima and Koroba-Kopiago

FPDA General Manager Greg Liripu told the people of Hela, agriculture will always be part of life and FPDA will work with farmers to achieve results.

Tari Pori MP and Finance Minister James Marape admitted that not all people in Hela will benefit from the LNG Project and people must put their hands in the ground to be successful in life.

Meanwhile most farmers called for a systemic marketing option to sell their produce, however invited stakeholder from the National Catering Service, Dorothy Kila, said the market is always there for the people.

Also launched were the FPDA’s Seed Scheme by Mr Marape and issuing of Certificates to Model Farmers by Koroba-Kopiago MP Philip Undialu.

The launching will see FPDA extend its training in the next 3 years to improve farming techniques and the plan of increasing the 12 model farms to 30.

Hela people are now confident of farming their own vegetable and fruit produce unlike in the past where they buy from Western Highlands and other neighboring provinces.

Gelu On Political Party’system In PNG