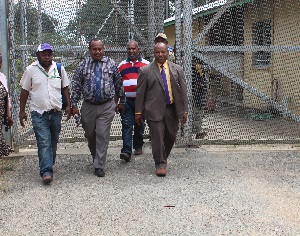 Jailed Komo Magarima MP, Francis Potape, has been released from the Bomana Correctional Institute after serving 7 months in prison.

Relatives, family and friends waited for Mr Potape to welcome him back since being sentenced last year by the National Court.

On Friday, a 3 men Supreme Court Bench allowed Potape’s appeal, quashed his conviction and set aside his sentence.

He was jailed by the National Court in 2014 for allegedly misusing public funds of more than K300,000 by paying it as sitting allowances to members of the Joint District Budget and Planning Priority Committee.

Outside the court, the Komo Magarima MP said the work of men have sent him to prison leaving the people suffering.

MP Potape says justice has prevailed, addibg that although the matter will be remitted to the National Courts for re-trial, he is ready to continue where he left off.

Potape was released on a K1,000 bail condition and will appear for mention at the National Court on 7th September 2015.