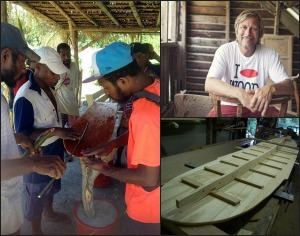 A former Californian professional surfer, Mr.Wegener travelled to Papua New Guinea earlier this year as part of the USC research project he started in 2013, into the sustainability of surfboard manufacturing on the Sunshine Coast.

He will present his findings from the trip at a special presentation entitled Surfboards of Papua New Guinea: How culture supports local industry on Wednesday 14 of October at USC (University of Sunshine Coast).

A chief elder from PNG got in touch with Wegener and expressed his concerns about the lack of locals surfing the traditional way, which is on wood surfboards that are crafted locally, Mr Wegener said.

Worries have been expressed over the culture being displaced with the introduction of foam surfboards from Australia and traveling surfers, and they’re extremely conscious of losing their surfboard industry to imports from overseas.

Mr Wegener spent two weeks in the village of Tupira in the Madang province of PNG to help local surfers and board makers update their design and construction methods in an effort to retain their culture of being surfboard builders.

While he was there he found that the native balsa wood, that is in abundance throughout PNG, could be the resource that will help get the surfboard construction industry back on its feet.

Wagener said, the Australian industry isn’t facing the same level of threat just yet, but the threat from overseas imports is very real.

Wegener, said he really hopes this work opens the eyes of Australian manufacturers, as well as local surfboard shapers.

He said he’d love to see local surfers attend this presentation in the hope to give them a renewed appreciation of what they do every day.

Papua New Guinea has village chiefs looking after the industry, and maybe Australian surfboard manufacturers should do the same, and find ways of maintaining local surfboard culture and appreciating its value to Australia.

Electronic Identification Not the Biblical “Mark of the Beast- 666”