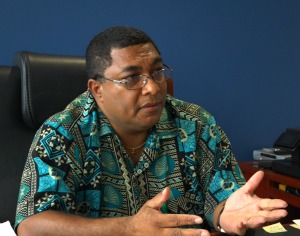 He is currently locked up at the Boroko Police cell awaiting bail.

Several arrests will be made on other officers within the lands department in the coming days.

Mr. Kila Pat was found to have conspired with two other officers within the lands department to defraud the state of K208,569.70

The money was from the Land Reform Trust Account and the cheque raised was paid to Bola Auto Parts.

His arrest and charge follows an internal audit within the lands department.

The audit found that he committed the act while on suspension as the Lands Secretary.

Acting Lands Secretary, Luther Sipisong, is aware of the arrest and charge of the former Secretary.

Sipisong says it is public funds under the trust account and should have been used for the intended purposes of land reform.

The lands department has been plagued with numerous cases of corruption.

Two other officers involved will also be brought in for questioning in the coming days.

Mr. Kila Pat is expected to appear before the Waigani Committal Court this Friday to answer to the charges.

Archbishop: Dealth Penalty Not the Answer