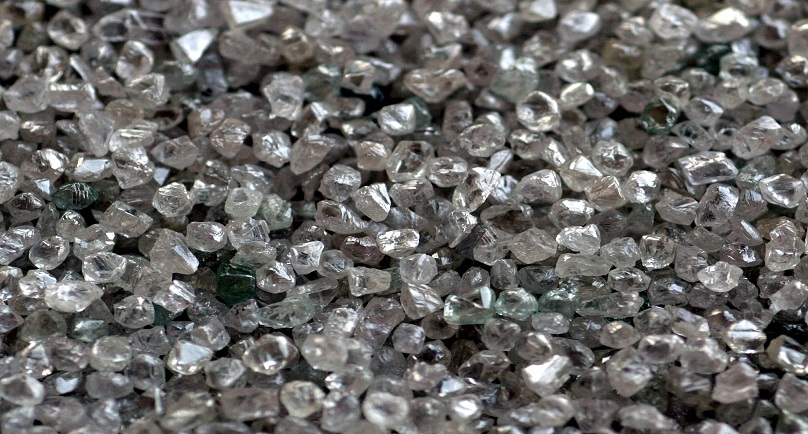 Image: Rough diamonds during their sorting process are seen at the Botswana Diamond Valuing Company in Gaborone, Botswana, in this August 26, 2004 file photo. REUTERS/Juda Ngwenya/Files

PARIS (Reuters) – Far rarer than diamonds or emeralds, some minerals on Earth are known only from thimbleful samples, according to a first list of 2,550 obscure minerals on Friday that could have future uses, ranging from industry to exotic Valentine’s Day gifts.

Ichnusaite, fingerite, amicite and nevadaite are among truly rare minerals – defined as those known to come from five or fewer places worldwide – and form only under extremely unusual conditions, the scientists wrote.

“Diamond, ruby, emerald, and other precious gems are found at numerous localities and are sold in commercial quantities, and thus are not rare” alongside those in the study, they wrote in the journal American Mineralogist.

“If you wanted to give your fiancee a really rare ring, forget diamond. Give her Sardinian ichnusaite,” Robert Hazen, a co-author of the study at the Carnegie Institution, wrote in a statement.

Ichnusaite forms from thorium and lead-like molybdenum and only one tiny whit’sh crystal has ever been found, in Sardinia. “Some of the other rare minerals are also only known from a thimbleful,” he told Reuters.

Of 5,090 minerals known worldwide, fewer than 100 make up 99 percent of the Earth’s crust. Most are from common elements such as oxygen, silicon and aluminum.

Some of the 2,550 rare minerals defined in the study might have commercial properties, from electronics to batteries, if they could be manufactured, the authors said.

Laser pointers, for instance, used to require rubies, but the rubies are now commercially manufactured. Artificial diamonds are also widely used, from industry to jewels.

The authors said some of the rare minerals required exact temperatures to grow, others formed only with rare elements, others can dissolve easily, or only occur in dangerous locations such as in volcanoes.

“They form in a perfect storm of conditions,” Jesse Ausubel, co-author at the Rockefeller University, told Reuters.

The authors estimated 1,500 types of mineral were still to be found on Earth. “There are some master jewelers who would love to work with the rare minerals tiara of the 21st century,” he said.

Australia and China vow to work on repairing bilateral relationship