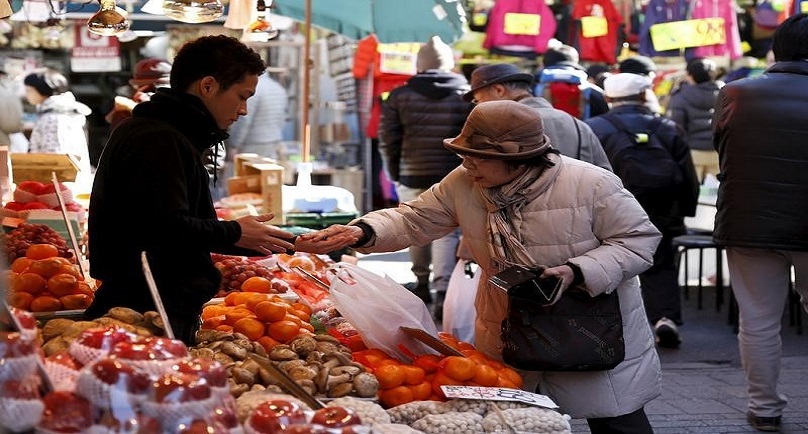 Image: A woman pays money as she buys fruits outside a vegetable store at Ameyoko shopping district in Tokyo, Japan, January 27, 2016. REUTERS/Yuya Shino

Most plants contain different flavonoids in varying concentrations. Some scientists believe these naturally occurring compounds have antioxidant and anti-inflammatory properties that could help explain some of the health benefits associated with diets rich in fruits and vegetables.

“We found that increased intake of fruits like apples, berries and grapes was associated with less weight gain and these are high sources of some types of flavonoids,” said lead study author Monica Bertoia of Harvard T.H. Chan School of Public Health in Boston.

Not all types of flavonoids, however, were linked to reduced weight gain once researchers accounted for how much fiber people ate, Bertoia added by email.

To examine the connection between flavonoids and weight, Bertoia and colleagues analyzed survey data on about 124,000 U.S. health professionals collected between 1986 and 2011.

They excluded people with chronic diseases and individuals who were obese at the start of the surveys, and also temporarily dropped data on women when they were pregnant.

Based on what people said they ate, researchers used U.S. Department of Agriculture data on flavonoid content in specific foods to determine how much of these compounds participants consumed.

Across all the studies, half of the participants consumed at least 224 milligrams to 247 milligrams of flavonoids a day.

Over each four year period, people gained an average of 2.2 to 4.4 pounds.

But people with higher than average flavonoid consumption tended to gain slightly less weight, researchers report in The BMJ.

The difference amounted to about one-tenth to three-fifths of a pound over four years for each standard deviation above the average amount of flavonoid consumption.

For example, consuming 7 milligrams more flavonols – a subtype of flavonoids found in tea and onions – than average each day was associated with gaining roughly one-sixth of a pound less weight over four years.

To measure the impact of all flavonoids, researchers adjusted for a wide variety of factors that can influence weight including age, gender, exercise, smoking, alcohol, caffeine, sleep and sedentary television time. They also accounted for other things people consumed, such as juices, fried foods, whole versus refined grains, full-fat versus low-fat dairy, sodas, processed versus non-processed meats, trans fats and seafood.

After adjusting for fiber consumption, which may influence weight gain by decreasing how much fat people absorb, only three types of flavonoids were associated with reduced weight gain in the study – anthocyanins, which came mainly from blueberries and strawberries in participants’ daily diets; flavonols and flavonoid polymers, which came mostly from tea and apples.

Other limitations of the study include its reliance on survey participants to accurately report what they ate and how much they weighed, the researchers note. Food questionnaires used in the surveys also may not have captured every dietary source of flavonoids.

Still, the findings suggest that choosing high flavonoid fruits and vegetables such as apples, pears, berries and peppers may help with weight control, the authors conclude.

It’s also possible, however, that people who eat more fruits and vegetables may have an easier time with weight management because they consume a healthier diet and eat fewer calories, noted Samantha Heller, a registered dietician and exercise physiologist affiliated with New York University Langone Medical Center in New York City.

“When we frontload our diet with plant based foods such as berries and peppers, we crowd out less healthy options like French fries and burgers,” Heller, who wasn’t involved in the study, said by email. “It could also be that these people are more health conscious than others.”