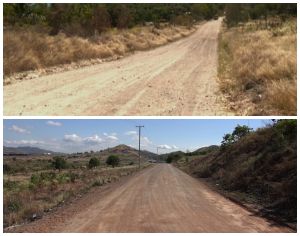 Governor Parkop said this will happen once they secure a K300 million loan from Bank South Pacific (BSP).

He announced this during his official tour of the newly constructed ring road linking nine mile to Gerehu roundabout, then through Baruni bypass and Hanuabada village.

Mr Parkop was impressed with the standard of the road saying it will open up city’s expansion and development.

Capital Project Coordinator, Augustine Ravi said they are managing within budget and on time.

The total cost of the project stands at K380 million. It was awarded to China Harbour Engineering Company after the government successfully obtained funding from China’s Exim Bank in 2014.

“Overall we are 48 per cent complete.

“We still half way through and still managing within budget,” Mr Ravi said.