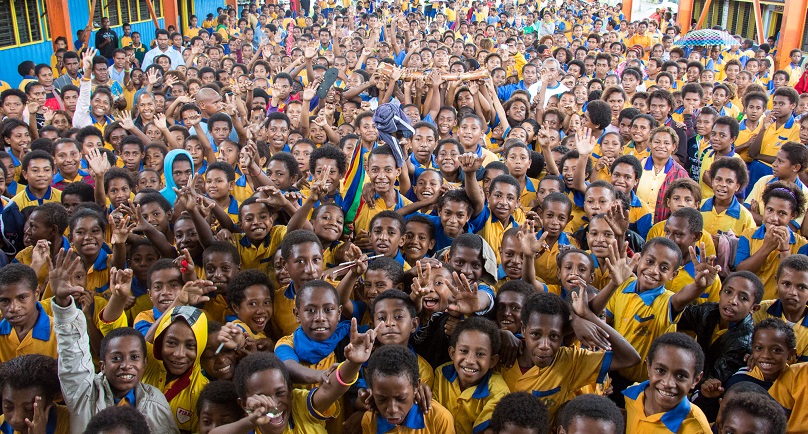 The Oil Search Pacific Games Relay today found themselves amongst a downpour of rain and had to delay its trip out to Finschaffen and cancel Siassi.

Grounded in Lae city the Baton went to visit the pukpuks at the Tablebirds Crocodile farm and had three join the Relay.

A Relay in the pouring rain along the pot holed highway back into Lae proved rather challenging as the vehicles struggled to move around what was more pot hole than road.

To keep the Baton moving it went on a series of school visits with kids standing in the pouring rain to get the chance to touch the Baton.

Markham Primary, Bugandi Secondary, St Pauls Primary, Malahang Technical and Busu High all got the opportunity to be a part of the day’s activity as the Relay dropped in.

Later the skies cleared a little and the team boarded the Niugini Heliworks superfast chopper to attempt to get to Finschaffen and back.

Flying under the cloud and skirting the dark sand coastline the Relay finally made it Finschaffen for a reduced program.

A welcome at the Gagidu primary school and keynote address by Sir Jerry Nalu, a Team Papua New Guinea representative at the 1963 South Pacific Games before a Relay around the town led by other former athletes including Ongeng Dengkeo, described as Papua New Guinea’s first iron man of soccer.

The kids running with the Baton chanted the town war cry – Finschaffen Mighty Koronas along with chants for Team Papua New Guinea.

The team departure took the Baton past Scarlet Beach, named after a bloody conflict in World War II but now a peaceful stretch of black sand with a message spelt out in white painted rocks – pacific games 2015 – welcome to Scarlet Beach, Finschaffen.