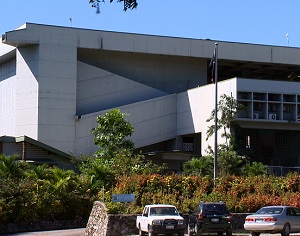 Last year the judiciary introduced the Fast-Track-Case, a procedure to promptly process pending cases of public interest at the National and Supreme Courts.

Such cases of public interest are election petitions, and cases involving high profile people, which are managed by Chief Justice, Sir Salamo Injia.

Currently, there are five election petition cases that need to be reviewed.

Chief Justice Injia is hopeful that these five petition cases will be completed in the coming months.

He said there are also other cases of public interest that they have expedited.

Apart from that, measures have been taken to improve the dispensing of cases so that judges manage them efficiently.

Last year, Sir Salamo Injia told EMTV that there were more than 7,000 criminal cases that were still pending dating back to 1983, because of irregularities in enforcement.

Because of that, an integrated centralised database was established for all law and justice sector agencies involved in the criminal justice processes to address such issues.

Eleven Memorandums of Understandings (MOUs) were signed by the agencies that resulted in the launch of the National Criminal Justice Improvement Project.

A special track was also set up and is managed by the Deputy Chief Justice, Sir Gibbs Salika, to assist in reducing the number of corruption and fraud related cases.

Sir Salamo confirmed the cases have been moving faster.

However, to assist, more judges are needed.