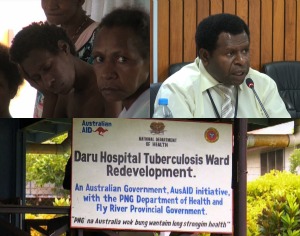 The patient who was diagnosed with Extensive Multi-Drug Resistance (XDR) tuberculosis in Daru, Western Highlands Province, has died.

News of his death was shared in the Special Parliamentary Hearing into the health management of PNG, this week in Port Moresby.

“The patient died, because we had to wait for the medicine to come from overseas,” Dr Hiasihri said.

Dr Hiasihri told the inquiry, multi drug resistance TB cases, continue to increase since detected in 2008. 249 cases recorded in 2014 was an indicator of a high rate of person to person transmission.

“As of November 6 this year, 102 new cases have been registered for treatment with 39% as primary cases,” he said. The TB Program has identified three phases to improve, strengthen and address the epidemic as outlined in the Provincial TB Strategic Plan and Accelerated Response Plan.

In order to effectively and efficiently address this epidemic, Dr Hiasihri said that funding and additional resources are immediately required.

Daru is the epicenter with transmissions of primary cases occurring both on Daru Island and communities along the coastline from Fly River delta to Mabudawan in the West.

Dr Hiasihri said that clinical response so far has been coordinated well but not sufficient. There’s need for additional health workers.

Meanwhile, Mabudawan Village in South Fly District, shares a border with Australia and Indonesia. This wet-land is only accessible through sea transport.

It is one of Papua New Guinea’s neglected villages, which hasn’t received much assistance from the National and Provincial Government’s.

According to Community Health Worker, Naidi Magau, most of the assistance comes from the Australian Government, because it’s under the treaty villager.

“Because we are neglected, most times, our patience are refereed or served at Saibai,” she said.
In May this year, EMTV visited Mabudawan with the Special Parliamentary Committee On Public Sector Reform and Service Delivery on a Fact Finding Mission.

Health service delivery is relatively poor. Every day is a struggle, with lack of funds for health patrols, medical equipment like labour beds, a run-down building, no vaccinations, electricity and water supply.