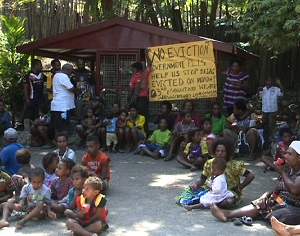 Settlers at Era Kone in Port Moresby face a possible eviction as early as next month.

However, they are disputing the eviction claiming developer, WK PNG Limited, did not acquire the land through proper process.

They are now calling on relevant authorities to step in to prevent them from being evicted.

The threat of eviction looms over this portion of land at Konedobu. In August 2012, WK PNG Limited acquired the land title to develop this land.

But, according to the landowners, it is still a customary land and are surprised at how the developer acquired the title.

Caught in between are the settlers who have on several occasions being forced by the developer to Va’ate the land. Many of them have refused to leave claiming the developer did not follow proper process.

Their previous legal action against the developer has failed but they have pursued the matter in court under human rights to stop the eviction.

The settlers want relevant authorities such as the land department to come clear on the status of this land before any eviction can take place.