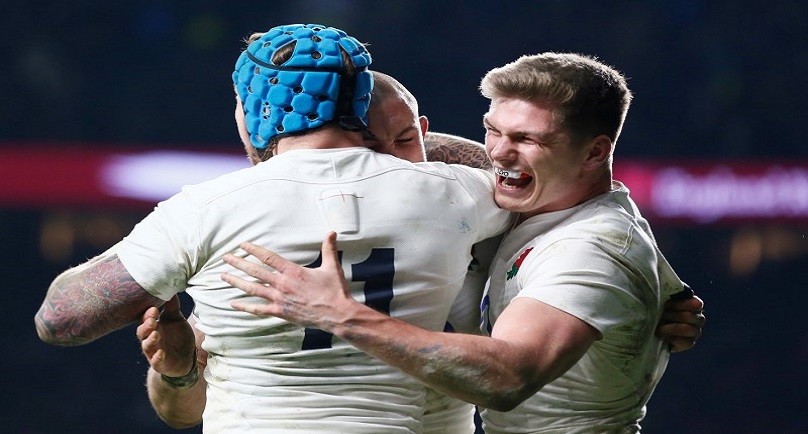 LONDON (Reuters) – Eddie Jones took another significant step in the rebuilding of England on Saturday as a 21-10 victory over champions Ireland at Twickenham kept them on course for a first Six Nations title since 2011 and a possible first grand slam since 2003.

England had dominated the game but trailed 10-9 after a Conor Murray try early in the second half before well-crafted scores by Anthony Watson and Mike Brown put the hosts in control.

Ireland, seeking a third consecutive title, looked underpowered throughout. Even when England went down to 14 men after a yellow card for replacement scrumhalf Danny Care in the last 10 minutes, Ireland never looked likely to find a way back.

England, who had already won away in Scotland and Italy, top the standings on six points, one ahead of Wales.
“I think our performances have stepped up,” said Jones.

“We were facing a better team today and we probably left 10 to 15 points out there, as we couldn’t always convert our attacking pressure. We weren’t quite sharp enough and we were letting them get a hand in at crucial times.”

The first half was tenaciously hard-fought but with precious little to get the fans out of their seats.

Number eight Billy Vunipola was again a wrecking ball for England and they dominated possession and territory but the nearest either side came to a try was when James Haskell blasted through, only for Ireland skipper Rory Best to hold the ball up.

So England turned round 6-3 ahead with two Owen Farrell penalties to one from Johnny Sexton, hoping that having forced Ireland to make almost 100 tackles in the first 40 minutes their dominance would bear fruit.

BURROWED THROUGH
Instead Ireland came out firing and with England down to 14 men after a yellow for Haskell scrumhalf Murray burrowed through for the first try England had conceded in the championship.

England struck back and relentless pressure allowed former captain Chris Robshaw to send a pass wide to put Watson over but Farrell missed the conversion.

Ireland, hard-hit by injury absences, began to show the effects of their huge defensive efforts and a zipping pass by Farrell sent fullback Brown over in acres of space.

Farrell added the extras and England looked set for an easy victory at 21-10 with 18 minutes remaining, though they needed a superb cover tackle by Jack Nowell to prevent Robbie Henshaw scoring in the corner.

England, who have not lost a Six Nations game at Twickenham since 2012, next host Wales when victory would leave them facing France in Paris with an opportunity to win their first grand slam since 2003.

“We are frustrated not to be in the mix for the title — this defeat ended our opportunity — but the players responded well to being written off prior to the game,” Ireland coach Joe Schmidt said.