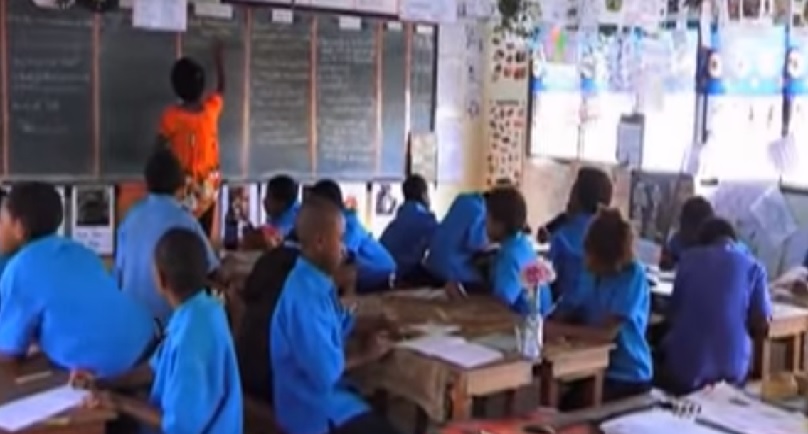 At the Kipuli Memorial Primary School outside of Wabag town, a class of youngsters sit for a test.

This is one of the many schools in Enga province that have benefited from the Enga Provincial Government’s free education policy.

The free education policy has come with its own challenges. In the last 20 years, enrolment has tripled. There are, now, more students in classrooms than in 1997. It is putting a strain on the existing infrastructure.

But the provincial government has been driving infrastructure development parallel with the enrolment increases.

“We used to have 22 teachers,” Says Ili Ratu, head teacher of the Primary School.

From the primary school, you can see the evidence of the infrastructure development at the teacher’s college – a new dormitory and a new administration building. Recently, the Enga Provincial Government partnered with the Institute of Business Studies to open a campus on the premises of the college.

Several kilometers away, at Sopas Nursing School, there is a similar story. The nursing school abandoned because of ongoing tribal fights previously, has been transformed into a learning institution that has brought in some of the best teachers from Papua New Guinea and abroad.

Half the number of students come from other parts of Papua New Guinea. This, putting into action, the province’s dream of making Enga another education hub in Papua New Guinea, just like Madang and Goroka.

“We have 76 students in the first year and another 76 in the second year,” says Principal, Noelyn Koutalo.

“We have a lot of students from other provinces and our governor is encouraging those students to be employed in the province.”

Drawing on its cultural links, Enga and Hela provinces have-co funded the construction of a polytechnic institute what will serve the upper reaches of the highlands. The man behind Enga’s free education policy is Governor, Sir Peter Ipatas. It took 20 years to achieve the success that the province is starting to see.

“We are encouraging students from other provinces to come to Enga,” Sir Peter says.

“Some other their cultural values are good for us. Good for our kids.”

Enga used to be part of the Western Highlands province. When new provincial boundaries were drawn up making Enga a province all to itself, Enga was left with little in terms of infrastructure and education system. The province also suffered from political and administrative instability.

“It has taken us 20 years to build the infrastructure and educate our kids,” says the Governor.

“If you look at the Eastern Highlands, the university alone brings in K50 million a year because you have students from other provinces.

“It’s expensive to send students to other provinces. We want to make Enga a hub.”

Extending beyond the primary and secondary school system, the provincial government is subsidising university education for 8,000 students in tertiary institution. Over 20 years, the results are starting to show.

A lot more parents are queuing up at the Enga’s only bank to withdraw money sent by products of Enga’s Free National News Policy who are now working in Papua New Guinea and abroad.

The Enga provincial government spends about 40 percent of its development budget on education. It is estimated to be far higher than many other provinces in Papua New Guinea.

Despite the odds, the social sector investment has begun to produce economic benefits.

Court Orders for Businessman’s Passport to be Returned