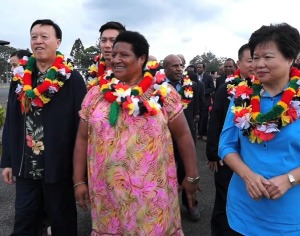 Eastern Highlands Province is aiming to share opportunities and common benefits with the Guangdong Province of the People’s Republic of China.

Eastern Highlands Provincial Administrator, Samson Akunaii, said it is an opportunity for the people of Goroka to learn new innovative ways from China people.

“It is our chance to explore all fields and sectors to drive economy agendas of our people”, Akunaii said.

Akunaii said Chinese influence in Eastern Highlands has been critical in the development of the province and people.

The relationship was again strengthened when the two provinces signed a memorandum of understanding during the meet.

Soso said this friendship will accelerate in a long but stable and diplomatic manner.

His Excellency Xiao Zhieng said the province is set to make history with Eastern Highlands People.

Gifts were exchanged between the two provinces to begin this friendship.