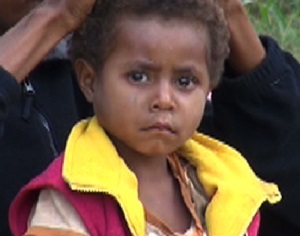 The Eastern Highlands region is really feeling the brunt of the recent dry spell, with Henganofi, Obura-Waninara and Onggai-Bena some of the hardest hit.

The Eastern Highlands PEC has put together a response committee, but more funding is needed from the national government for sufficient action to be taken.

In the Obura-Waninara district there are reports of crops struggling to grow because water has dried up.

In Henganofi, water tanks have been depleted and sewage in the station hasn’t been working, affecting the work of public servants.

Community health workers around the province fear the worst, as without water, dysentery and waterborne diseases could become a lethal killer.

District disaster coordinators are now attempting to get all reports into the Provincial Headquarters in Goroka.

As Hengnofi MP and Police Minister, Robert Atiyafa has called on the Provincial Government to solve its differences in the administration and help the people with relief supplies.

“My area is grassland and the dry spell has severely hit my area, the people are finding that food and water are becoming harder to find,” said Atiyafa.

The Eastern Highlands Provincial Government has been facing an impasse over the position of the Provincial Administrator.

Julie Soso said the impasse has been solved after an agreement was reached between the old Provincial Administrator and the newly appointed Administrator.

A disaster committee has been elected by the PEC to help the nine districts of the Province.