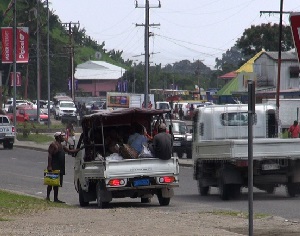 New statistics gathered by HIV Voluntary Council Testing sites in East New Britain Province have given indications of an increase in HIV infections in the province.

The provincial AIDS council and Red Cross revealed the increase is spurred by a combination of economic and social factors, such as prostitution.

Rusiana Kunai Teko, a HIV Trainer and advocate, said the number of people getting infected by HIV had increased steadily.

A recent report of confirmed HIV cases in the four districts of East New Britain puts Kokopo District at 137 new cases, followed by Gazelle at 77, Rabaul with 57 and Pomio with 12 cases since 2013.

“In five to 10 years’ time, our people in East New Britain will be badly affected by HIV” said Teko

However, this data is gathered from people who go for voluntary testing. Many others, who are reluctant to go for testing, remain unaccounted for and those figures are expected to increase in the next few years.

Over the years, both government and non-government health organisations have repeatedly reminded us about the dangers of HIV, and that information can be recited from memory.

While HIV awareness may not be appealing to the people here, its long-term impacts are expected to be severe.

The provincial AIDS council also fears that in the next few years, PNG’s productive age group, who are between the ages of 15 and 29, might be greatly affected by HIV.

“To give an example, in 2009 when the LNG deal was signed in Rabaul, the visitors brought thousands of Kina with them. And at the Rabaul Hotel, there were lots of young girls who gathered there to sell sex to the visitors,” said Teko

East New Britain is going through a rapid change, both socially and economically.

Businesses are poised to expand, living standards will improve and people, with limited means of earning an income, will be exposed to unsafe sexual behaviour.

The provincial AIDS council says HIV awareness must be maintained to educate people who take the HIV/AIDS epidemic for granted.

Works Department To Revive Its Responsibilities