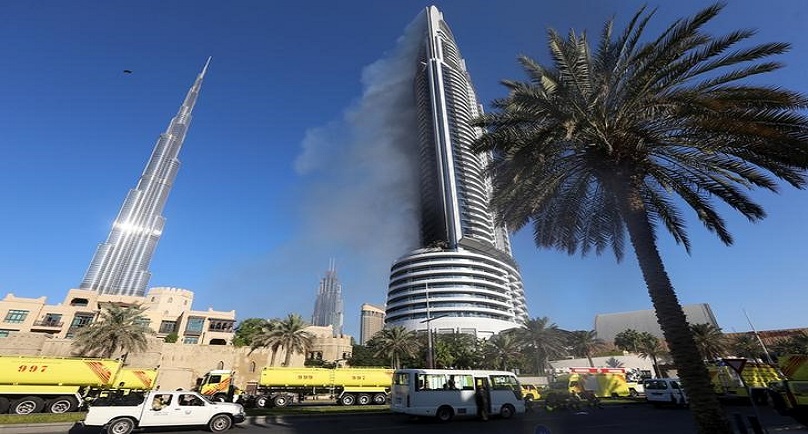 Image: Plumes of smoke rise from the 63-storey Address Downtown Dubai hotel and residential block near the Burj Khalifa, the tallest building in the world, a day after the hotel caught fire on New Year’s Eve, in Dubai January 1, 2016. REUTERS/Stringer/Files

DUBAI (Reuters) – Bookings in Dubai’s tourism industry are looking strong for the first quarter of this year despite the fire which swept through a downtown hotel on New Year’s Eve, the head of the emirate’s tourism department told Reuters on Sunday.

Fire engulfed the 63-storey Address Downtown luxury hotel and residential tower as thousands gathered below the nearby Burj Khalifa to watch a huge fireworks display.
Pictures of the blaze, the emirate’s second major fire of 2015, were beamed around the world, but Dubai’s allure as a tourism hub has not been diminished, according to Helal Saeed Almarri, director-general of Dubai Tourism.

“Quarter 1 forward bookings are looking strong and we remain focused on this growth,” he said, noting the “swift and efficient handling of the incident at a very busy time of year” highlighted that people’s safety was always a priority.

Tourism is a key pillar of the economy of Dubai, which has established itself as a entertainment and conference hub.

Overnight visitor numbers jumped 7.5 percent in 2015 to 14.2 million, as the emirate built on its policy of attracting tourists from a wide range of countries, aided by the expanded reach of airlines Emirates and Flydubai, Almarri said.

Asia was the largest source of growth, with a 26 percent year-on-year jump in Indian visitors to more than 1.6 million people, making India Dubai’s number one source of visitors.

South Asia as a whole saw an increase of 21.7 percent year on year, with the rest of Asia rising 17.9 percent, led by a continued gain in Chinese tourists.

Turning to 2016, the slackening of economic growth in Asia would be among the main challenges for Dubai’s tourism sector, Almarri said, as would currency fluctuations.
With the U.S. dollar — to which the United Arab Emirates’ dirham is pegged — at multi-year highs against many currencies, the cost of visiting for many has escalated.

The impact has already been seen with visitors from Russia, CIS countries and Eastern Europe slumping 22.5 percent in 2015. The Russian rouble has been hit by the impact of Western sanctions, while Central Asian nations are suffering from the collapse in oil prices.
Almarri added Dubai was focusing on attracting families as their numbers were on the rise, especially among Gulf nations — which constituted the largest segment of visitors at 3.3 million in 2015.