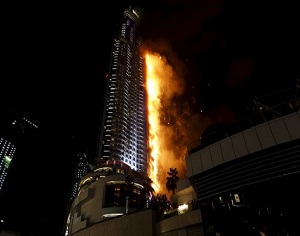 A fire engulfed a 63-storey skyscraper in Dubai on New Year’s Eve; however, thanks to swift evacuations, only minor injuries were reported and authorities allowed nearby celebrations to carry on as planned.

Flames shot skywards from one side of the luxury Address Downtown Dubai hotel and residential block, which stands across a plaza from the 160-storey Burj Khalifa tower where people had gathered for fireworks to mark the New Year.

But as midnight struck, the Address building continued to burn, while onlookers cheered to a mass of multi-colored fireworks enveloping the Burj Khalifa. It almost looked as if the fire was part of the fireworks show just 100 meters away.