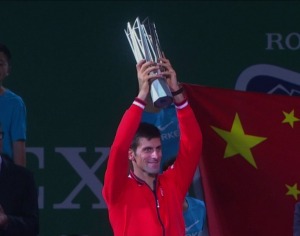 World number one, Novak Djokovic fortified his ranking by winning another Shanghai Masters title on Sunday in China.

It proved all too easy once again for Djokovic as he blitzed past Frenchman Jo-Wilfried Tsonga to win the title.

Midway through the second set, the 19th seeded Tsonga came back firing, much to the excitement of the crowd.

But it was the world number one who had the last laugh winning the second set 6-4.

This is Novac’s third Shanghai Masters title and his ninth title in a stellar 2015.

It’s also a second straight tournament Djokovic has won without dropping a set after he landed his sixth China Open title in Beijing last week.

The Serb now boasts a 38-1 win loss record on the Chinese hard-courts.