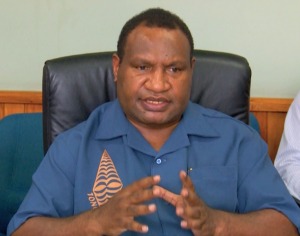 The cabinet has authorised the use of the DSIP and PSIP to fund disaster relief efforts.

Finance Minister, James Marape, made the announcement today saying the 89 District Development Authorities will now become the coordination points of all disaster relief efforts in their respective districts.

Minister Marape clarified that no additional funds will be given.

The government decision is for districts to reprioritise the K2million from their DSIP for drought relief.

He said along with this authorisation, the cabinet has issued certificates of inexpediency to several companies provide goods and services as needed.

While most of these companies are based in the Highlands and Momase region, Marape said, other companies will be engaged in a similar way for the other regions.

The Finance Minister said, this arrangment is an effort to make the districts become the coordination points for disaster relief so as to minimise bureaucratic delays.

Marape and the Finance Secretary, Dr Ken Nangan, confirmed that DSIP funds are being sent to the districts.

The last payment was a K1million that was sent to all districts last week with another million planned to be sent out last week.

Marape said the balance of the DSIP funds will be paid out before the end of this year.

This announcement comes amidst calls for the government to allocate more funds towards the impact of the El Nino conditions throughout the country.

The government’s earlier allocation of K25million has been used up.

For the 2016 budget, Marape said drought relief will be given serious consideration.