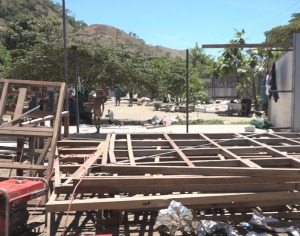 The displaced residents of Taurama in the Moresby South Electorate are concerned about their welfare after being evicted from their homes.

Residents say they had only a week’s notice prior to the eviction.

Since last week, residents and business owners have watched their homes and properties get demolished by a construction company under police escort.

Residents have not protested or fought back with the authorities but are furious that they were not given ample time to relocate to sought out their grievances.

A resident, Gabriel Meka, said, “They (NCDC) should have given us at least three months’ notice in advance to move out but they only gave us two weeks. Two weeks is not sufficient time to move out. We have put up permanent structures in this area.”

Residents and business owners are upset with the damage caused by the eviction. This has also left some residents homeless.

The eviction will allow for the construction of the four lane road, announced by NCD Governor, Powes Parkop, late last year.

Copra Farmers Affected Due to Lack of Competition