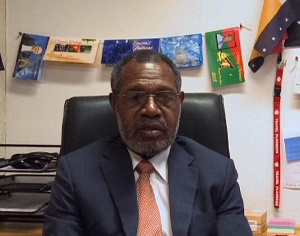 This year will mark three years since the draft of the Manam Restoration Authority Act was written.

Following the Manam people’s evacuation from their volcanic island, they were placed at care centres on the Madang mainland to await permanent resettlement.

This wait has lasted over 10 years and the province’s governor is desperate to put an end to it. In an interview with EM TV before the parliament session began, Madang Governor Jim Kas said:

“I hope this will be a special one for the people of Manam Island.”

He said volcanologists predict there is one more major eruption to come, so going back to the island is not an option for the people. He sees this parliament sitting, the first for the year, as the one in which he hopes the Act will finally be passed to start the resettlement process.

“With the help of the chief secretary, it is ready,” he said of the Act.

The plight of the Manam people has gone beyond the resettlement of a group of internally displaced people.

The longer they wait to be resettled, the larger and more complicated the issue becomes.

“It’s not only Manam people who are affected – the people on the mainland who are hosting them are also affected because of the tension, the fights and killings that have occurred.”

According to the governor, the provincial government and administration are prepared and ready to implement the resettlement programme. The holdup, he says, is in the composition of the board members.

“There are two views on this matter. One is that the board should comprise of experts, people other than politicians. The second view is that politicians should make up the interim board. I will not support the second view. ”

Governor Kas fears politicians will further prolong the issue and this, he feels, should not happen. He wants the board to be modelled against the Gazelle Restoration Authority.

For Manam and the Bogia communities who are hosting them, the wait cannot be over too soon.

In November last year, a delegation of Manam leaders and Bogia community leaders accompanied Governor Kas to present the draft of the Manam Restoration Authority Act to the Chief Secretary, Sir Manasupe Zurenuoc.

Back then, Peter Muriki, Secretary for the Manam Council of Chiefs said:

“Enough is enough. Lives have been affected. Our frustrations have affected the host community and as they say, it has caused a manmade disaster for them.”

For Governor Kas, the resettlement of the Manam people is part of a bigger plan for the province.

Apart from Manam, there are two more volcanic islands in the province: Karkar and Long island. The success of resettling the Manam islanders will mean the province is prepared for similar and possibly bigger events in the future.