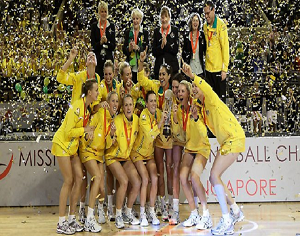 The Australian Diamonds maintained their supremacy in Netball when they defeated arch rivals New Zealand in the Netball World Cup finals in Sydney over the weekend.

After a shock loss to the Silver Ferns on day three of the tournament, the Diamonds exacted revenge when it mattered to claim Australia’s 11th world title.

The Diamonds edged out New Zealand 58 – 55 to be crowned Netball World Champions for 2015.

The New Zealand Silver Ferns went into the final undefeated, but a nine goal deficit from the first quarter left the silver ferns unable to catch the Diamonds.

New Zealand couldn’t work their way to upset Australia in the end, with the Diamonds being able to hang on to win.

Winning the 2015 Netball World Cup gives the Australian Diamonds Commonwealth and World Cup victories in consecutive years for the first time in 16 years.