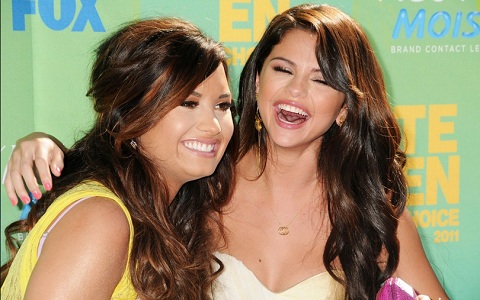 The recent outburst of Demi Lovato unfollowing her BFF Selena Gomez on Twitter last month has triggered so much speculation and her recent appearance on Bravo's TV Show has clearly stated her stance in the relationship.

Upon agreeing to be part of Bravo’s “Watch what happens live” appearing alongside Actress Jessica Alba, Demi agreed to play a round of “Plead the Fifth”.

Host Cohen reminded her, out of the three questions he asks; she has only one to get out of – to plead the fifth.

The Camp Rock Star’s entreatingly replied with “"I'd kill Bieber. I'd kill Simon. F–k, I'd kill Joe, too!" Lovato said. "No, Joe and I are good friends, so I wouldn't kill him. I'd keep him around."

When Alba cut in with “Who would you Shag?” She gave a flat “None”.

The questions became a little more difficult. "Not including your own behavior, what is the most scandalous thing you ever saw a Disney Channel star do?" Cohen asked. "And you don't have to name a name."

“I can’t answer that! I Plead the Fifth.” Lovato replied.

The big question was popped at the end. Lovato should have thought twice about saving her fifth for the last when he asked “You recently unfollowed your BFF Selena Gomez on Twitter. So much speculation about this! Can you tell us why?

She jokingly replied “Um, I Plead the sixth, if that’s in the game. But the host persisted “Are People reading too much into it? Are they reading into something that doesn’t exist?

"I think it's just one of those things where people change and people grow apart," Lovato finally answered.

Boy that must have been hard.

The two pop stars met in 2002 and had their first big gig together on Barney The Purple Dinosaur. They both stayed for two years.

Although they have had times where they would not talk for months, it is hard to say if this is just one of those phases.

Father of Murdered Woman: No Compensation, Let him face Justice