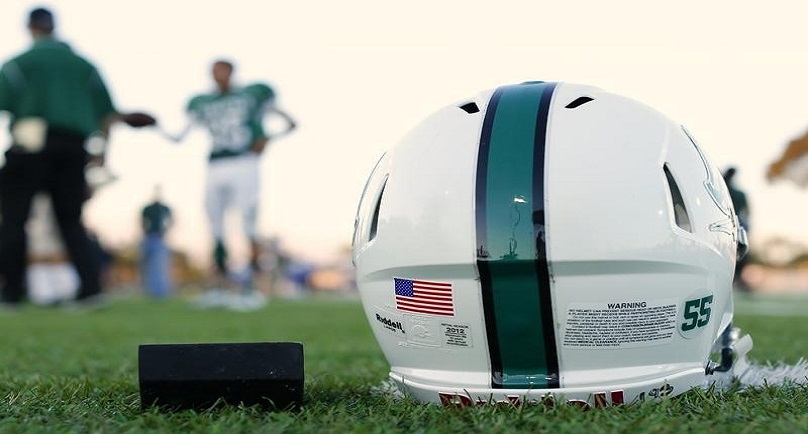 Image: A football helmet’s health warning sticker is pictured between a U.S. flag and the number 55, in memory of former student and NFL player Junior Seau, as the Oceanside Pirates high school football team prepares for their Friday night game in Oceanside, California September 14, 2012. REUTERS/Mike Blake

(Reuters Health) – A 25-year-old former college football player who sustained repeated hits to the head showed signs of brain damage after his death that may offer fresh clues about how concussions impact athletes, U.S. researchers report.

The young man had what’s known as chronic traumatic encephalopathy (CTE), a traumatic brain disorder that can only be diagnosed during an autopsy. He died of cardiac arrest related to an infection in his heart, but the autopsy showed signs of brain damage consistent with CTE, researchers report in JAMA Neurology.

“There is a common perception that CTE affects only professional athletes; this case as well as many others shows us that contact sports athletes at the amateur level are also at risk for the disease,” lead study author Dr. Ann McKee of Boston University said by email.

While this isn’t the first former football player to be diagnosed with CTE after years playing contact sports, this particular athlete had a series of psychological and cognitive tests before his death that offer some insight into how symptoms of CTE might develop, McKee and colleagues note in their report.

The athlete started playing American football at age six and continued for 16 years; he played Division I college football as a defensive linebacker and special teams player.

He suffered more than 10 concussions, all while playing football, the first occurring at age eight. None resulted in hospitalization.

During his freshman year of college, he had a concussion with momentary loss of consciousness followed by ongoing headaches, neck pain, blurry vision, tinnit’s, insomnia, anxiety, and difficulty with concentration. Symptoms persisted, and he stopped playing football at the beginning of his junior year.

His grades plummeted and he left school, as he continued to experience symptoms ranging from loss of appetite to thoughts of suicide, the researchers report.

At age 24, neurological tests found he had memory and recall problems, speech and language impairment and difficulties remembering and reproducing line drawings.

After his death, researchers examined his medical records and his donated brain and agreed he had post-concussive syndrome with possible CTE and major depression.

While more research is needed before drawing widespread conclusions, the researchers conclude that CTE should possibly be considered in young athletes who have repeated head trauma as well as persistent mood and behavioral symptoms.

“The relevance of this case is that it underscores how our conventional means of approaching a diagnosis in practice, including history, exam and neuropsychological testing and MRI – all of which were done for this patient – are insufficient to distinguish CTE from other disorders,” Noble said by email.

A better system of tracking concussions, that goes beyond the current practice of noting the injury rate based on the total hours on the field, might ultimately improve our understanding of CTE, Noble added. Because many injuries don’t result in concussions, it might be useful to track what happens when athletes suffer hits to the head, he said.

“Aside from a summary of hits, other factors including time between hits, intensity or other hit qualities may refine our concern, but other as yet unmeasured factors could be equally or more important in establishing concussion diagnoses more accurately,” Noble said.