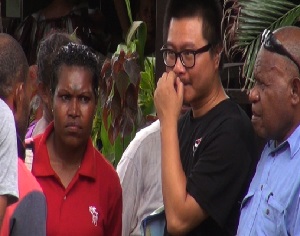 The Waigani Committal Court has ordered two Asian men to surrender their passports to the clerk of courts, as bail conditions.

Senior magistrate, Cosmos Bidar, made the ruling when both appeared for mention this morning, on misappropriation charges.

He was formally charged for four counts of false pretences, misappropriation and causing disaffection amongst police officers, under section 136 of the Police Force Act.

Two similar allegations were brought against Woo in 2015 but were not followed through and were dismissed by court.

Magistrate Bidar explained the charges to Woo and extended his bail until his case returns to court on March 14.

In the second case, the accused, James Qianbin, appeared for mention on one count of misappropriation.

He was alleged to have used over K 200,000 belonging to his employer, Green International Limited.

Qianbin is out on a K4,000 bail awaiting police investigations.

His matter returns to court on March 30.

Following their mention, the court ordered both to surrender their passports to the Clerk of court and remain within Papua New Guinea until their case is over.

In other matters, one woman accused of killing her husband on February 7, had appeared for mention.

Helen Palane, from Western province was charged for wilful murder.

She was advised by magistrate Bidar on the seriousness of her case and told that bail will only be granted at the National Court.

Traditional Carvings Removed from Parliament to be Returned