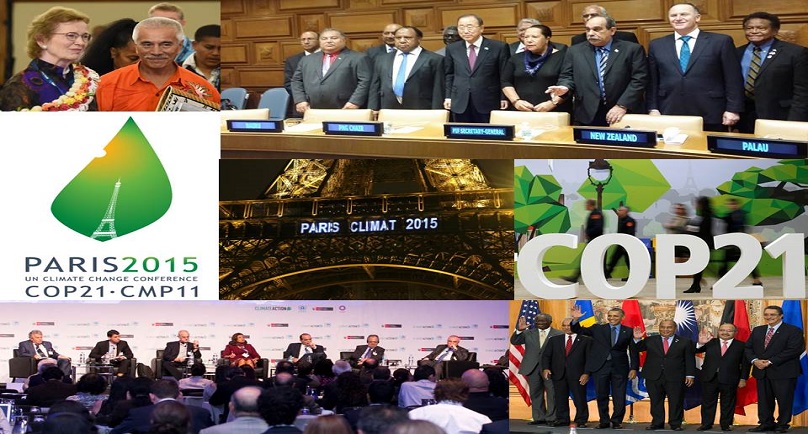 The climate change conference in Paris (COP21) is said to be the most historical meeting for world leaders in over 20 years of UN negotiations, in order to stabilise the earth’s average temperature rise. The aim is to reach a global agreement to keep global warming below 2 degrees Celsius.

While most world leaders have stepped forward with their pledge towards climate change, there is no greater emphasis placed on this matter then that from members of small and vulnerable islands facing climate change effects right at their door steps.

Speaking at the conference, leaders of island nations presented their case of climate change evidence to back up their stand; to reduce the average rate of global warming temperature to 2 degrees Celsius or 1.5 degrees Celsius.

“The 2 degrees goal which many espouse will lead to the loss of entire countries,” said Perry Christie, the Prime Minister of the Bahamas.

“And a 1.5-degree goal is not only desirable, it is achievable and feasible.”

There are more than ample scientific studies to prove and back up the plight of small island nations.

According to a report recently published by the science research and journalism group Climate Central, if global warming rate were to increase to 4 degrees Celsius, 93 per cent of the population in the Marshall Islands, 88 per cent of people in Tuvalu and 77 per cent of Kiribati’s population would be at risk.

But if world leaders could reach an agreement to lower global warming down to 2 degrees Celsius, the risk faced by Kiribati would drop by 48 per cent.

“Just imagine you are in my shoes. What would you do? I believe no leader in this room carries such a level of worry and responsibility,” said the Prime Minister of Tuvalu, Enele Sopoaga.

“Our appeal is simply to ask that the future and the future of our children be assured.”

He added: “We stand on a cliff edge. This is the time, excellencies, that we must stand together and shape our future, let’s do it for Tuvalu, for if we save Tuvalu, we will surely save the world.”