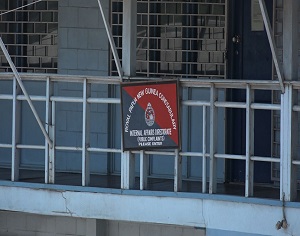 The second suspect police officer, accused to have been involved in the ‘Condom Eating’ Saga, was brought into Port Moresby today after he fled to the Highlands last year.

He was located and apprehended in Southern Highlands yesterday and is now in police custody awaiting formal charges.

The suspect, a police officer, arrived in Port Moresby at 11:30 this morning on Air Niugini’s PX 181 flight from Mt Hagen.

He was escorted by the Port Moresby Police unit, that travelled up to Nipa earlier this week.

A team of senior officers from the Royal Papua New Guinea Constabulary waited for his arrival outside the terminal.

The suspect officer was brought to the Internal Affairs Directorate at 12:30 today.

He is the second of three police officers alleged to have forced a young woman to swallow condoms at the Boroko Police station on December 4, last year.

It is understood the suspect officer was posted to work in Nipa before the ‘Condom Eating’ Saga. However, he refused and continued working in the NCD Command.

He was attached to the Gordons Police Station and only fled the city when investigations into the saga commenced.

The third suspect, another police officer, is still to be apprehended.