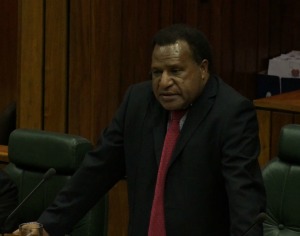 He also asked how LLG funds can be accessed by the people, in the event of failed LLG elections.

Minister for Provincial and Local Level Government, and Deputy Prime Minister, Leo Dion, was present to respond to the questions.

The Member for Dei began by pointing out the important work done by LLG Councils in the districts.

Nukundj revealed that LLG elections were conducted in his electorate, however the Electoral Commission declared these elections void.

“How do we compensate those people who are performing the role of a counselor in the electorate?” Nukundj asked.

Dion said that elections are failed when the Electoral Commission says so and those elected at the time, simply cannot function.

Nukundj also asked about the LLGSIP funds that cannot be accessed in the absence of the LLGs.

Regarding supplementary elections for LLGs, the Member for Dei demanded to know when these would be held given the limited time left before the next National General Election.

Dion urged all provincial governmen’s that have had failed LLG elections, to step in by way of funding and assist holding successful by-elections.