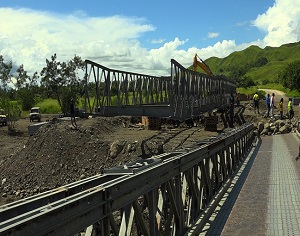 A collapsed bridge between Lae and Madang was re-launched today.

The Menya Bridge in the Middle Ramu area, Madang Province, collapsed last December after heavy flooding washed away its foundation.

The bridge was replaced with a 300 metre bailey bridge that will act as a temporary cross-over for travelling vehicles.

While the country continues to lose most of its bridge infrastructures to natural disasters, the Works Department is looking for new ways and technology to put an end to this trend that is causing millions of kina in damages and repair.

Works Secretary, David Wereh, told EMTV News that the Department will do extensive survey before building bridges as many river systems throughout the country are unpredictable in changing how they flow from one end to another.

“We have some of the most unique river systems in the world. The rivers are changing their course every day and it makes it difficult to build bridges,” Wereh said.

Meanwhile, the National Government under Prime Minister, Peter O’Neill, is committed to rehabilitate major National Highways and roads throughout the country. Major works on the highlands highway from Lae to Tari in the Hela Province are said to be complete by 2018.

Counsellors And Ward Members Not Paid