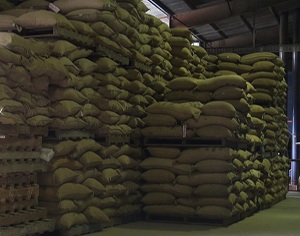 Coffee remains one of the most popular beverages in the world. About one per cent of the world’s coffee comes from Papua New Guinea.

But, not many Papua New Guineans know how PNG’s organically grown coffee is processed.

What happens behind large corrugated doors of a coffee factory remains one of many people’s curiosity.
Coffee beans go through numerous processes before they end up in a store.

Much of the coffee beans that end up in big factories come from small scale coffee growers.

First, the manual labour, the cherries are picked, and hulled.

“Much of the work is done by the sun… we dry coffee bean Coffee beans are then to allow its parchments to peel off”, said Ishmael Awute of Awute Coffee.

Many coffee farmers use the cost efficient manual coffee pulping machine.
For big factories, the work is done by machines dedicated to each section along the processing line.

“We have recently installed new machines in our new coffee processing plan…it has the capacity to produce up to six tonnes an hour”, said Jerry Kapka, the owner of Kongo coffee factory.

Some coffee farmers sell their processed coffee in bulk to local factories factory.Others sell no more than 20 kilograms, fetching roughly K32 at a price of K1.60 per kilogram.

Each coffee producing country develops its own preference of how to prepare coffee.

Papua New Guinea’s coffee export amounts to about one precent in the world market.