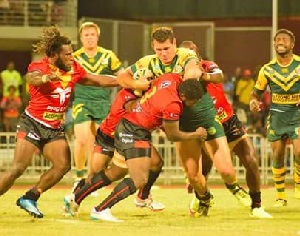 Kumuls Prime Minister’s 13 coach, Stanley Tendep, said one reason for their loss last weekend was due to not having enough time for preparation.

One factor which helps in a team’s performance is preparation; he said it will be better to have the team in camp and in training well before the game.

This year, the Kumuls had only a week of training before the PM’s 13 match.

Players in this year’s team were all from the local intercity cup competition.

Stanley also said, if we are going to stick to the same selection process of picking players from the Intercity Cup, then the team should be announced earlier.

Papua New Guinea may have a better Kumuls team in the future with talent rising from the local league and the Hunters.