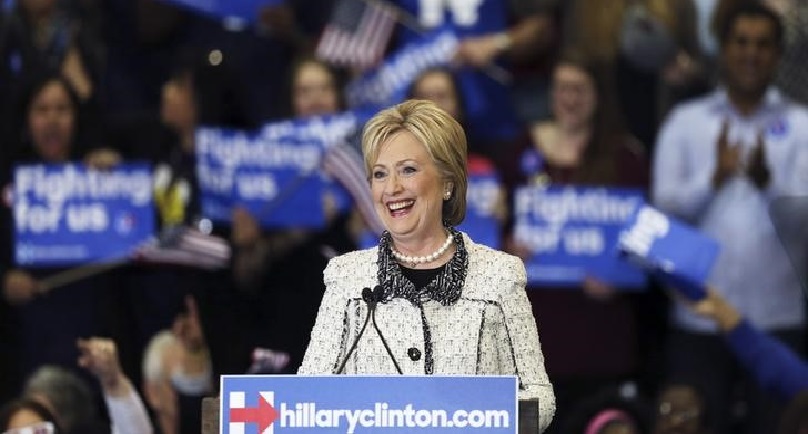 By John Whit’sides and Amanda Becker

The rout of Sanders solidified Clinton’s status as the strong front-runner to capture the party’s nomination for the Nov. 8 election in her quest to become America’s first woman president.
With more than 95 percent of the votes counted in South Carolina, Clinton led Sanders by a 48-point margin, dramatically reversing her 28-point loss in the state to President Barack Obama during their bitter 2008 primary battle.

The former secretary of state decisively established her strength among black voters, a crucial Democratic constituency, giving her the upper hand on Super Tuesday in six Southern states with big black populations.

After the win, Clinton appeared to look ahead to a general-election matchup with Republican front-runner Donald Trump, the billionaire whose campaign slogan is “Make America Great Again” and who promises to build a wall on the border with Mexico.

“Despite what you hear, we don’t need to make America great again, America has never stopped being great,” she told cheering supporters in Columbia after the win. “Instead of building walls, we need to be tearing down barriers.”

The result was Clinton’s third victory in the first four Democratic contests, and raised more questions about whether Sanders, the democratic socialist U.S. senator from Vermont, will be able to expand his support beyond his base of predominantly white liberals.

Sanders, who has energized the party’s liberal wing and brought young people to the polls by attacking income inequality and Wall Street excess, needs a breakthrough win in a key state in the next few weeks to keep his hopes alive.

NATIONAL RACE
The Democratic race now becomes a broader national contest. Eleven states, including six in the South with large minority populations where polls show Clinton with big leads, will vote in the Democratic nomination fight on Super Tuesday and four more over the next weekend.
“Today you sent a message,” Clinton said. “In America, when we stand together, there is no barrier too big to break.”

Sanders admitted defeat in South Carolina early in the night.

In the Republican race, Trump and rival Marco Rubio accelerated their political slugfest during dueling appearances in Arkansas and Georgia, exchanging an onslaught of personal insults that began on a debate stage on Thursday.

“The majority of Republican voters do not want Donald Trump to be our nominee, and … they are going to support whoever is left standing that is fighting against him to ensure that we do not nominate a con artist,” Rubio told reporters in Georgia.

Trump, speaking in front of his private plane in Arkansas, belittled Rubio and accused the first-term U.S. senator from Florida of being fresh.

“I watched this lightweight Rubio, total lightweight, little mouth on him, ‘bing, bing, bing’ … and his new attack is he calls me a con artist,” Trump said. “The last thing I am is a con man.”

In South Carolina, exit polls showed Clinton winning big with almost every constituency. She won 9 of every 10 black voters, as well as women, men, urban, suburban, rural, very liberal and conservative voters. Sanders won among voters between ages 18 and 29, and among white men.

Clinton’s camp hoped the big win in South Carolina, after more narrow victories in Iowa and Nevada and Sanders’ clear win in New Hampshire, will set her up for a big night on Tuesday, when about 875 delegates will be up for grabs, more than one-third of those needed to win the nomination.

Recognizing his steep odds in South Carolina, Sanders had spent most of the past week in states that will vote in March. As the results rolled in on Saturday, he held a rally in the Super Tuesday state of Minnesota.

At least 10 killed by wildfires in California wine country