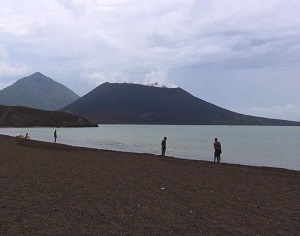 The Rabaul Volcanological Observatory in East New Britain Province has had a significant impact on the area over the past three decades. Much, if not all of the volcano related information we see from the Province is relayed from the volcano centre.

But obtaining this data is sometimes a very dangerous excercise for volcanologists. It means getting right into the danger zone to get what is required.

Mikhail Sindang, a volcanologist is one of the officers at the Rabaul Volcanological Observatory who visits the Tavurvur volcano once a month to assess and collect volcanic data.

The journey up to the crater of Tavurvur, and back down, is one of the most challenging journeys to make.

It is a constant 45-degree climb and descends over trenches and solidified molten rocks that accumulated during the last eruption 12 months ago.

“Trenches are formed when earthquake occurs. Many earthquakes will cause the trenches like canyons to widen. Even a slight increase in the temperature means danger. It means I shouldn’t climb the volcano. There’s greater possibility of an eruption,” Mikhail said.

Climbing volcanoes is a dangerous expedition. While a volcano eruption can be predicted, earthquakes cannot.

Any sudden earth tremor can cause an avalanche on the pumice on the surface of the volcano.

At the Rabaul Volcanological Observatory office, earth movements are being monitored closely on computers in real time.

The information gathered here also comes from other small volcano centres as far afield as Manam in Madang and Esa’Ala in Milne Bay.

“Data collected and stored at the Rabaul Volcanological Observatory goes back 10 years. We provide data to the public in Rabaul on what’s going to happen and when,” said Ima Itikarai, a senior volcanologist at the RVO.

In 1994, Tavurvur erupted and buried the town of Rabaul under several meters of volcanic ash. The volcano isn’t giving off ash like before but volcanologists say that doesn’t make it any safer.

As Papua New Guinea focuses its efforts on disaster mitigation, this small centre and its officers will continue to play a key role in gathering and disseminating timely disaster related information. PM Replies, ‘I have nothing to hide’