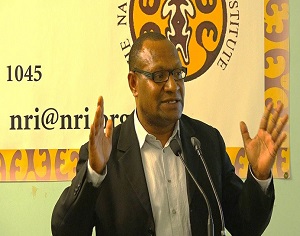 The National Research Institute (NRI) will be releasing its latest report on the relationship between city growth and the Urban Development Plans of Port Moresby and Lae.

The report titled ‘Improving Urban Development in Papua New Guinea’ highlights urbanisation concerns regarding the increase in growth of informal settlemen’s, illegal development and the unequal distribution of basic government’services.

NRI Director, Dr. Charles Yala, explained in a media statement that though Port Moresby and Lae were competently designed and formulated to international standard practice, the plans were unable to dictate the real development in the cities.

“The results of the review shows that even the best formulated plans will begin to fail if they lack a government context which supports them and enables them to be effectively implemented,” Dr. Yala said.

Dr. Yala added that planning and recent developmen’s in both cities over the last 40 years have gone in opposing directions.

By this, he meant the creation of new residential areas and the construction of business houses on the outskirts of Port Moresby and Lae are not properly planed. And, as a result, may affect the flow of government’services into these areas.

But while much focus is on Port Moresby and Lae, other provincial towns are also facing the increase in rural urban drift.

Many people come to major towns because the access to government’services is much quicker and the opportunity to find employment, higher.

But Dr. Yala says the report that will be released on Wednesday captures alternatives that support the implementation of the national government policies.

These strategies include, the Four Cities Policies, Affordable Land and Housing and Voluntarily Customary Land Registration.

The report will be launched in collaboration with the Morobe Provincial Administration, the Lae Chamber of Commerce and the University of Technology.