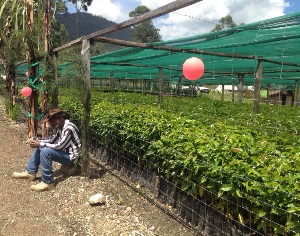 Agriculture and Livestock Minister, Tommy Tomscoll launched the beginning of the coffee replanting from government funded nurseries that will be managed by Papua New Guinea’s Coffee Industry Cooperation throughout PNG.

“We need to replant trees to ensure that we keep the quality of coffee high,” says Benjamin.

Farmers Training and Extension Manager, Matei Labun said there are direct interventions being carried out to maintain and improve the quality of coffee, coming from Papua New Guinea.

But, the real challenge for CIC to keep PNG as a quality producer of coffee, is to teach village farmers to replant and maintain coffee trees.

The Coffee Industry Cooperation has backing from the government to implement these programs.

Agriculture & Livestock Minister, Tommy Tomscoll launched the opening of one of the first nurseries on Friday 13 March, at Mauro Village in the SineSine district of the Chimbu Province.

In his speech, he said the government is directly investing K7 million to the local farmers by giving them new trees to plant.

“This partnership is between the people and CIC,” says Minister Tomscoll.

This replanting program will put Papua New Guinea at the top five of coffee producing countries in the next three years.

NCD Volleyball into elimination round